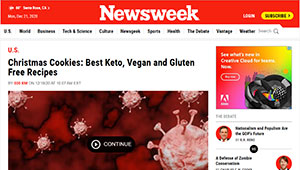 Celiac.com was featured in an article on Newsweek that covers holiday cookie recipes:

"Celiac.com, which features a network of authors including 'doctors, nurses or nutritionists who are leading experts on celiac disease,' according to the website, offers a gluten-free (and dairy-free) version of classic sugar cookies. The recipe can be adapted to create four different variations (snickerdoodles, cut-out cookies, pressed cookies and 'jammie sammies'). 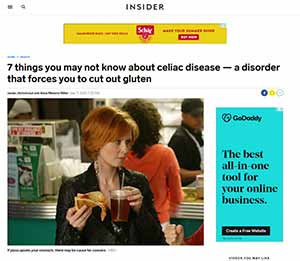 September 11, 2020
Title: 7 things you may not know about celiac disease — a disorder that forces you to cut out gluten 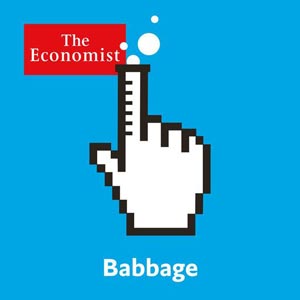 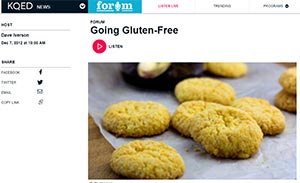 Dave Iverson interviewed staff writer Jefferson Adams for an episone called "Going Gluten-Free" which discusses: "If you're gluten-free, going to the grocery store used to mean spending hours reading labels to avoid anything with wheat, barley or other grains. But with the rising number of people with celiac disease and gluten intolerance, more stores and restaurants are offering gluten-free foods. We'll discuss the rise of gluten-free diets."

This interview provides an excellent overview on the rise of the gluten-free diet. 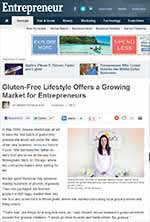 Brian Eha interviewed Scott Adams regarding past and future trends in the celiac disease/gluten-free market, especially with regard to the future growth of gluten-free product sales.

This acritle gives a snapshot of the current market, traces some of its historical growth, and gives a perspective on its possible future. 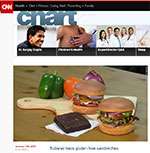 "With Subway exploring a wheat-free alternative, is this a sign that major food chains are paying more attention to gluten sensitivities such as celiac disease? 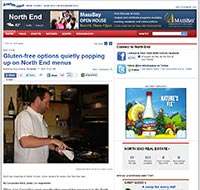 Boston.com's Cassandra Bent interviewed Scott Adams regarding the future direction of the gluten-free food market, and current and future trends in celiac disease and gluten sensitivity diagnosis. From the article: "Today, Adams says, doctors are testing more patients and patients are asking to be tested more because of the vast amount of information and media coverage of the disease."

Celiac.com was featured on Pg. D4 in an excellent article on the fast growing gluten-free food market, "That has fueled a 'constant bombardment' of the food companies by celiacs demanding to know what products are gluten-free, says Scott Adams, a celiac who founded the online Gluten-Free Mall and Celiac.com in Santa Rosa, Calif."

The article goes on to describe the gluten-free market in the USA as a $600 million dollar per year fast-growing industry, with celiac support group membership at over 95,000.

Celiac.com was featured in the food section in an outstanding and very comprehensive article on gluten in foods and the gluten-free diet. In the section "Fact about celiac disease and some resources" it lists: Celiac.com--a comprehensive 10-year-old Web site, based in Santa Rosa. Founder Scott Adams reports 250,000 visitors a month, a number that is rising 10-20 percent a year. Great site for information, food lists, message boards and links." 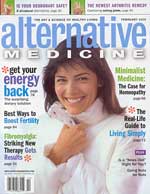 Celiac.com was featured on Pg. 81 in an outstanding article on celiac disease in the February 2005 issue of Alternative Medicine magazine. In the section "A Day Without Gluten" Linda Smith, a librarian who lives in San Francisco, answers the question: "Are there any resources you'd recommend?" Her answer: "The one I've used the most is celiac.com. The site has lists of forbidden and safe foods, which is really handy, especially with all the unfamiliar ingredients used in processed foods, like malt, that we tend not to know about."

Celiac.com was featured on Pg. 64 in an excellent article on celiac disease in the February 17, 2004 issue of Woman's Day magazine. Woman's Day has more than four million subscribers, reaches a total audience of 20 million, and is one of the top ten selling magazines in the USA. Celiac.com is listed in this article as a prime source for information on celiac disease and the gluten-free diet. 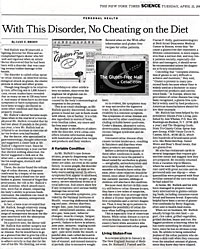 The New York Times
Tuesday, April 23, 2002
Health/Science Section
Title: With This Disorder, No Cheating on the Diet

Celiac.com was featured in a recent New York Times article on celiac disease. The article said the following:

"...But thanks to the efforts of others with the disorder, www.celiac.com offers reliable information along with
hundreds of gluten-free recipes and products and their vendors."

The article subsequently ran in many other newspapers across the country and internationally, including the International Herald Tribune.

Congratulations. You've been directed to this page because we like your web site so much that we've added it to the med411.com directory.

Criteria for selection include:

A high level of integrity and credibility Benefits of inclusion in the med411 directory are:

Congratulations! Your website has received an award from HealthAtoZ.com, the premiere site for authoritative health information on the Internet. You and your organization have been chosen above hundreds of others for superior content, ease of use, layout and/or overall appeal. Be on the lookout for our next email - the award will be attached, signifying that our seasoned team of medical catalogers has reviewed and chosen yours as a featured (starred) site.

Offered to sites which meet Medinex's high standards, and agree to follow their strict Code of Ethics governing a selected few Internet sites which are listed in their excellent directory.

After careful review by a human Information Specialist, we've deemed your Web site a valuable health resource and have added it to the HealthWave directory - http://www.healthwave.com/  and the Galaxy directory. Launched in January of 1994, Galaxy was the first Internet directory/search engine on the Internet, and one of the most respected names on the Web. Galaxy's goal is to provide the public with a gateway to the best of the Web and to build, in conjunction with our partners, smaller specialized directories, such as HealthWave, that provide users similar access to the best the Internet has to offer. Galaxy's high volume of traffic, consistently ranking it among the Web's top sites, makes a listing in Galaxy/HealthWave a valuable asset for any Web site.

BioMedLink is an evaluated and annotated database of Internet resources for the bio/medical community jointly created by BioMedNet and the University of Indiana. New entries are added weekly, and existing entries are reviewed and rated by our editorial board. BioMedLink has been described as 'the Yahoo for biological and medical researchers'.

Award Net is proud to present the "Celiac Support Page" with one of our "Most Prestigious Awards", the "Chef Award" - May 14, 1998.

This award is not given lightly. The web site was thoroughly reviewed/critiqued prior to award consideration. We are pleased to report, your web site received a rating of Outstanding in the "Chef Award" category. Well done!!

Food and Wine Online Newsletter Site of the Day for May 7, 1998.

Chosen for outstanding content and/or design, each selected site will be featured on our Web site and will also be feature on ChefNet our foodservice industry resource.

From a broad overview of CD by a noted physician to close-up pictures of DH, this fellow celiac has compiled helpful information from a variety of sources including medical journals, books, doctors, scientists, and newsgroups. Get answers to FAQs, safe product lists, and information about grains. Read medical journal articles and research summaries, and plan to attend the next conference or meeting near you. Find out essential yet little-known information such as tax deductions for qualifying gluten-free items.

You'll also find information about related disorders and an explanation of allergy versus intolerance. Lists include suppliers of gluten-free products, celiac organizations, and publications, including gluten-free cookbooks, medical books, and newsletters with ordering and/or contact information. There's also a list of recommended doctors from all over the world. A search engine adds to this comprehensive, well-designed, and easy-to-use site.—KMP

Web Guide Magazine's Rating for the Celiac Support Page (10 is the best):

Celiac (gluten intolerance) is a condition often misdiagnosed by doctors. Scott Adams was told he needed surgery before he discovered that simple dietary changes could save him the pain and discomfort of his "condition," and he wants to help others avoid the same hassles. He's succeeded admirably in putting the necessary information out there; his page is comprehensive and well-written. It's a must-use resource for anyone who has unexplained, possibly dietary-related health problems.

NetGuide's Rating for the Celiac Support Page (5 stars is the best):

This is an informational notification to let you know that we have recently re-reviewed your Web site for inclusion in the Mental Health Net comprehensive Web database. I am happy to let you know that your site has been awarded a three-star rating on Mental Health Net, the largest review guide of mental health, psychology, and psychiatry resources online today. Mental Health Net is an Ohio not-for-profit organization devoted to mental health information and education resources online. A great page with information on this disease, diets, etc. Easy to navigate and read. Includes research information and many articles worth reading.
https://www.celiac.com/ - 7 May 1997 - TKS, and June 19, 1998 - JMG

Mental Health Net's Rating for the Celiac Support Page (3 stars is the best):

Review: This Celiac Disease Web site is a thorough effort that can answer the most common questions about the condition. In addition to a long series of FAQs, it also offers articles on why gluten intolerance is on the rise, and what kind of treatments are available.

Articles here also explain the difference between allergy and intolerance, and identify both safe and dangerous foods. There are also listings of recipes, gluten-free suppliers, and the stores that sell them.

Pros: You will find a link to a celiac newsgroup here. An internal search engine makes finding your topics of interest easy.

Cons: An article on tax deductions for celiac sufferers may not apply to Canadian taxpayers.

Highlights: Make sure you haven't been misdiagnosed -- check out the list of diseases that celiac can be mistaken for.